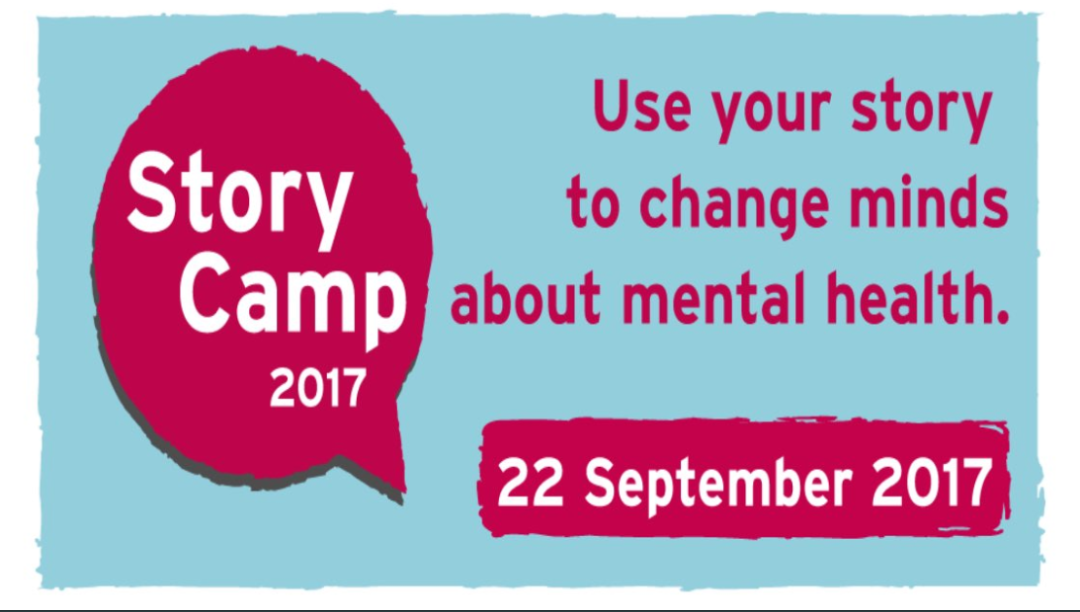 I can barely believe it’s been a whole year since I slept in, bodged my eyeliner and didn’t have time to wash my hair before dashing to the train station and winging my way to London for the Time to Change storycamp event.

But it has. A whole year. And in that year so much has happened. Needless to say, Time to Change and all the fabulous peeps there have played a big part in my life.

So I was seriously chuffed to be asked to speak this year alongside Andrea, Shea and Jodie (I love the blummin’ lot of them). 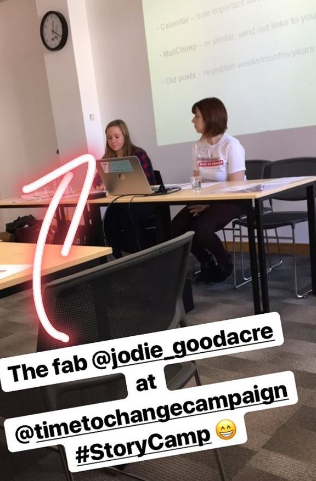 Storycamp is run by Time to Change to encourage and inspire more storytellers to share their experience of mental illness. The point being, not to give advice about treatment, but to share experiences in the hope of smashing a big giant hole in the shit that is mental health stigma.

And I say storytellers to incorporate everyone. Because it’s not just for the written word. Bloggers, vloggers, media volunteers, illustrators and more – as Shea pointed out, you can even tell a story through embroidery!

There was an amazing bunch of people who attended who have all blogged already or are considering blogging. Then we had some pro journalists and others who worked in the sector. Some had sadly experienced discrimination themselves and wanted to affect change.

Basically, every person in that room had a great big passion for that one thing. To stop ‘prats’ like Piers Morgan making us ‘mentallists’ feel like shit (credit due to the group who labelled him in that way with their flip chart paper and marker pen.)

We had Shea inspiring us by just being Shea (if you want a public speaker, book this woman!) but also by teaching us about the essence of storytelling and its importance and potential impact. It can change lives! Really!

We had Jodie sharing hints and tips on blogging. How to set one up, how to plan content, how often to blog, etc. Jodie’s also a Time to Change champion who regularly speaks at schools about her experiences. She’s a diamond!

And the lovely Andrea who is a great vlogger and blogger. Andrea reminded us that we don’t need to be tech geeks to vlog. Neither do we need to be TV presenter polished or have a studio backdrop. Authenticity, she told us, was key. You simply cannot argue with that. And I know that at least one participant was brave enough to record their first vlog after hearing Andrea speak (big up Natalie).

Both Andrea and Jodie were joined by Dominika from the TTC digital team.

And then there was me. I was joined by the fabulous Ellie from the TTC media team. That girl has a wicked sense of humour! We shared our tips on how to get your story into the traditional media – newspapers, magazines, TV, radio and online titles.

So hopefully people got a good idea on how to take things forward as a Time to Change ambassador (and all-round kick-ass stigma-busting babe).

But wait – how can mentally ill people achieve good shit like this?

Well most people wont have to ask this question. But for anyone who does, mental illness doesn’t rear its ugly symptoms 24/7. I mean, if you have IBS you’re not sitting on the shitter 24/7 are you? (although I’m sure it feels like it at times!).

An illness like anxiety, for example (that does rear its ugly head in me every so often) doesn’t make me scared of everything. It’s rare for me to have an anxiety attack relating to a talk or presentation. I’m pretty chilled about it to be honest. But I’m absolutely not chilled about the fact that my husband’s phone went out of signal at 12.30 and I had visions of him being involved in a car crash or worse. I was on at 3pm. I received a text to say all was good with his day, nowt to worry about, he’ll explain later why he couldn’t talk. So I panicked. ‘Tell me NOW!’ a gazillion texts to him screamed.

He tried to call me and then it went dead. I called, and called, and text and text, and Facebook called. No answer.

My phone battery was dying so I plugged the old iPhone in at the wall and hovered for 20 minutes or more, frantically checking and checking. I felt sick, my mouth was dry and I couldn’t concentrate on anything at all.

Just seven minutes before my presentation I got through. Due to the number of calls and texts his tired iPhone received from yours truly, it had died. This resulted in him being unable to navigate to the place he needed to be as he had no sat nav. With that in mind, and knowing his wife far too well (‘I KNEW you’d be thinking I was dead in a ditch!’) he found the nearest petrol station, bought a snide charger, plugged the phone in and spoke with me immediately.

What was the point of that ramble?

Anxiety doesn’t make me weak. Mental illness doesn’t make anyone weak. But what we, and all the new TTC storycampers will continue to do is weaken the damaging stigma that still, to some degree, surrounds it.

We are the Time to Change campaigners and we WILL make a difference.

PS – shout out to Rich who didn’t speak at the event but attended and has done some AMAZING work already including national press and TV. And we felt like we knew him already through all the great social media work he has done. Check him out in this wonderful documentary.

PPS – if you don’t get the headline I envy your youthfulness.

The sky is falling in....the strange obsessions of an anxious mind. Penned by a neurotic hen-keeping feline friend. Prone to exaggeration, catastrophisation and over excitement at the garden centre. Caution: do not feed Diet Coke after dark View all posts by Lucy Nichol

One thought on “Good morning Storycampers!”